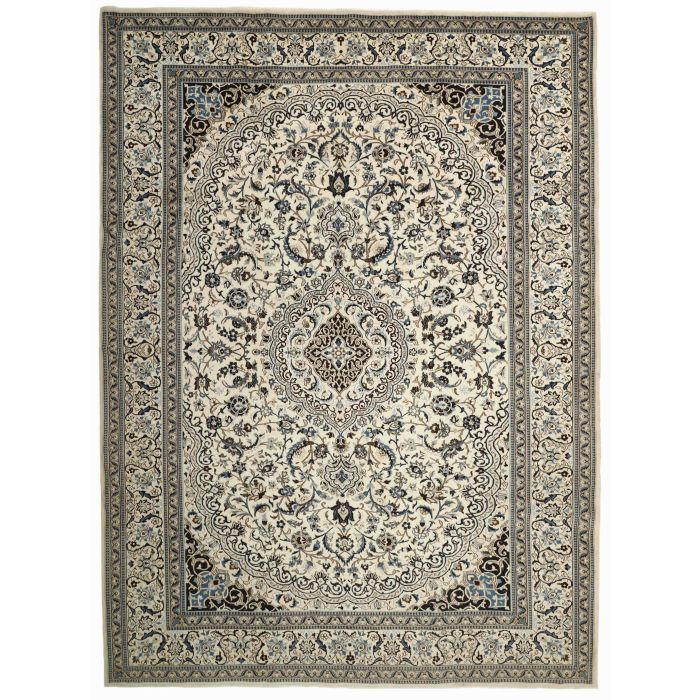 Skip to the beginning of the images gallery
Kuvaus
Nain is a city of about 50.000 people, located in the Isfahan Province. It has historic significance, since it was the last stop on caravan routes before Kavir-a-Lut, one of the deserts that stretch through the centre of Iran. The Nain Mosque is one of Iran’s oldest, and is built far better than the later and more famous mosques of Isfahan. The industry in Nain was traditionally focused on the production of wool garments, but the weavers switched to rug production when the demand fell. Their new products soon became famous, as the weavers were skilled and used good quality materials. The warp and weft are cotton, with a wool pile and contours of silk. Sometimes, silk is used more in the base. The colours are refined; nuances of ivory and cream, with small areas of red, green, and blue. As with the rugs from Isfahan, the patterns of the Nain rugs are also classical. The Nain rugs are made in all sizes, including the very large of up to 60m2, and some of these have a pure silk pile. The largest Nain rug produced was 20 by 20 metres.
Lisätietoja
Arvostelut
Kirjoita arvostelu
© 2021 Nettimatto.fi - Suomen suurin mattovalikoima